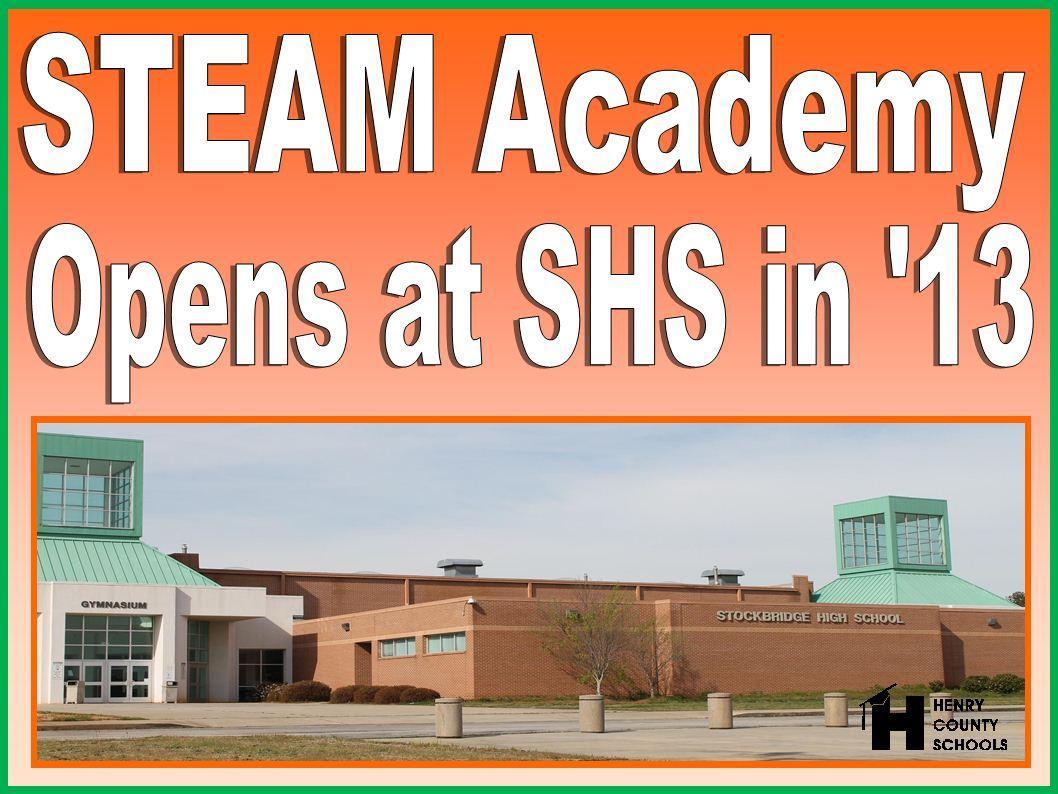 HENRY COUNTY, GA – Several students at Stockbridge High School will be a part of the inaugural Stockbridge STEAM Academy program when the 2013-2014 school year starts in August.

The newest “school within a school,” as Principal Eric Watson describes it, will aim to provide a student-centered interdisciplinary education, focused on science, technology, engineering, arts (visual and performing), and mathematics (STEAM), while engaging students to think critically and compete globally.

The commonly known STEM focus is growing in popularity and importance throughout the nation, but add one letter to the acronym and it encompasses a greater segment of any school’s climate.

“The school leadership team added the Arts (A) in STEAM to reflect its commitment to and recognition of the arts as a critical component of education,” said Watson.  “Our parents indicated they think the STEAM Academy would benefit the students of the Stockbridge High School cluster.  They were excited that we would be preparing students in critical areas like Biotechnology and Engineering as well as the technical side of the entertainment industry.”

The school’s STEAM advisory committee put in many hours of research to ensure that Stockbridge High School and its cluster would have a top-notch program in place.  One example of a school they visited was Forsyth Central High School and its STEM Academy.  The resulting partnership between Stockbridge and Forsyth has the local endeavor heading in the right direction according to school officials.  The model school Stockbridge is using as an example recently scored well above the state average on the newly introduced College and Career Ready Performance Index (CCRPI).

For students all throughout Stockbridge High School, there will be some level of introduction to the STEAM Academy and its offerings.  Current students will have an opportunity to take some of the new courses that STEAM will bring to the curriculum. For example, the addition of a music technology pathway including a digital keyboard class, AP music theory and eventually a recording studio lab are features more than just STEAM Academy students will be exposed to.

“Existing students will have an opportunity to sign up for these courses,” said Watson.  “Additionally, every student will be exposed to an increased level of rigor and academic expectations. The entire school will be on a modified block schedule that will afford teachers more time for project-based learning in the classroom.”

There are many goals for the classes and students participating in the STEAM Academy.  Learning and working in a challenging, technologically advanced environment will provide students and graduates of the program and school with STEAM research and publication experience, international awareness and perspectives, and a commitment to lifelong learning, just to name a few.

The focus of the academy also stretches down to its feeder middle and elementary schools.  Students will begin to be exposed to a rigorous mathematics and science curriculum in the earlier levels of school to ensure they are ready for the demands and expectations that await them later in high school.  Elementary and middle schools will engage students to pursue STEAM activities through summer camps and in-school field trips.

According to Watson, the program plans to create a culture of high expectations, collaboration, and service that will prepare students to succeed in an increasingly complex global society.

“Upon graduation, STEAM high school students will be highly sought after by select universities and industries, regionally, nationally, and internationally.”