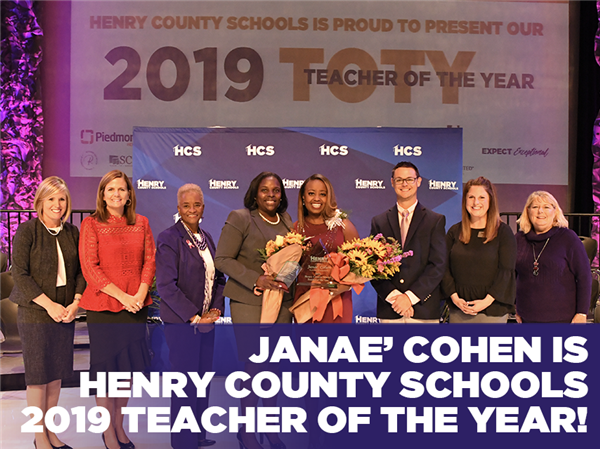 Cohen was named a finalist during the evening event along with Christy Collier (Locust Grove Middle School) and Jaime Henck (Luella High School).

The top teacher in the district is a 9-year veteran teacher and 4-year veteran in Henry County Schools.  She now moves on to represent the school system in the Georgia Teacher of the Year competition.

There were several sponsors for this year’s event, including Piedmont Henry Hospital supporting the event as a Platinum Sponsor.  This top sponsor, along with several other local businesses helped support the event with either gifts or donations for the semifinalists, finalists, and the overall winner.  SCB-TV served as media sponsor for the gala.

The announcement was a surreal experience according to Cohen.  She shares that she is still in shock by the news.

“Every day, I try to do my very best to give my kids the absolute best,” said Cohen.  “To have my name called for this distinguished honor in front of everyone has been beyond anything I could have imagined. In addition to it being an honor, it is a blessing to represent the students, teachers, and all Henry County Schools personnel. I am proud and humbled to have the opportunity to receive the district's top honor.

The biggest prize of the night was a one-time stipend from the school system to the Teacher of the Year for $5,000.

All 53 Teachers of the Year from the respective schools in the district were recognized with plaques, flowers, and other items provided by Piedmont Henry Hospital, Children’s Healthcare of Atlanta, Shane’s Rib Shack, and Martha Mae’s Flowers and Gifts.

Special guests and entertainment for the evening included remarks by Superintendent of Schools Mary Elizabeth Davis, on-stage musical performances by Juli Gilbert and Clayton Jolley, supported by the Cotton Indian Elementary Chorus, and a keynote address from outgoing HCS Teacher of the Year Kelley Theodocion.

Superintendent Mary Elizabeth Davis shared how important this event is for the school district.

“The Teacher of the Year Gala is truly about celebrating the outstanding teachers in our district for their dedication to the most important job in the world,” said Davis.  “The teachers featured tonight and our new Teacher of the Year are important examples of why learning in a Henry County classroom is so special and second to none.  We are thrilled to have Janae’ Cohen now move on to represent our district at the state level.”

Over 700 attendees were able to start the evening at a pre-ceremony dessert reception at the Academy for Advanced Studies.  Guests were also treated to musical performances at the reception and the Performing Arts Center lobby by the Ola Middle School string ensemble.

The sponsors for the evening were recognized for their generous contributions, and the list of sponsors is as follows: