HENRY COUNTY, GA – Sportsmanship exists in many of the traditional examples to which observers are accustomed. Sometimes these acts are unspoken expectations. But one baseball player for the Henry County High School Warhawks did the unexpected before his team’s game on March 29 against the Eastside High School Eagles out of Newton County.

Less than a week before their game took place, Eastside High School’s team experienced tragedy up close when one of their player’s father suffered a medical emergency during a home game and passed away as a result. The contest between Henry County and Eastside was the first game back for Eastside pitcher Michael Hipps, Jr., since the passing of his father.

With an already emotional crowd on hand at Eastside’s field, the home team released balloons in honor of Mr. Hipps. What transpired shortly thereafter is where the unexpected takes place.

Henry County High School senior Jo Vaal Hollingshed was the first batter of the game and he made his normal walk to the batter’s box like so many games previously. Before the first pitch was thrown by a player who had been coping with the recent loss of his father, Jo Vaal stepped away from the plate, laid his bat down and headed toward the pitcher’s mound.

With compassion and a selfless spirit, the visiting team’s player reached out to hug his opponent, shook his hand, and offered his condolences for the loss of his father. The two returned to their respective positions and the game commenced. The Eagles topped the visiting Warhawks when the final out was recorded, but everyone in attendance departed from the event inspired.

The act between two baseball adversaries left those in attendance in awe of the simplest but grandest of gestures that ranks high above the levels of sportsmanship that are seen today.

In her remarks before a packed boardroom, Fuhrey recalled the circumstances and gesture that warranted the recognition, while sharing that Hollingshed was only the second person in the history of the honor to not be a part of the Newton County School System. The other individual is Dr. Frederick Douglas Reese, a civil rights activist and icon responsible for organizing African American teachers, leaders and other members of the community in Selma, Alabama to secure their right to vote. Reese is the only surviving member of Selma’s Courageous Eight—he turned 87 last November.

Fuhrey went on to thank Hollingshed for his “very extraordinary display of character and compassion for a member of a competing team” and shared that his thoughtfulness and kindness were to be commended.

“In today’s day and age, we all could use a lot more kindness and a lot more thoughtfulness,” remarked Fuhrey. “While he might think his actions were simple, they meant a great deal to our Newton County family.” 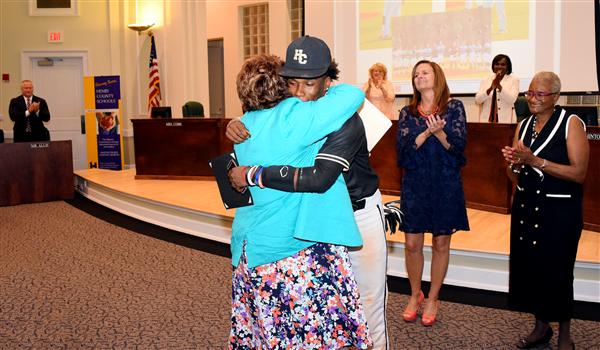 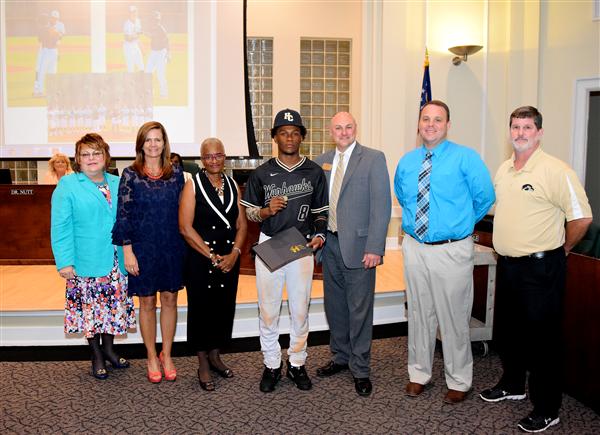