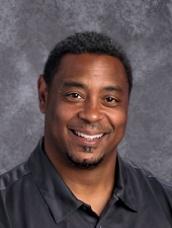 Robert Sims is an “Army-Brat” who was raised all over the world with his two sisters and brother. His mother was the classic stay at home mom who ruled with an “Iron Fist”.  His father toured extensively in the United States and abroad to include two tours in Europe. The six years in Europe was the most exciting part of moving “all around the world”!  Living in Europe has granted him so much appreciation in connecting with people.  He[Rob's father] eventually retired from the military and The Sims family made Fayetteville, NC their permanent home.   As a young man, Robert played high school football for 71st H.S. and eventually received a scholarship to play college football at Fayetteville State University.

Robert is also a co-owner of a Disc Jockey business called Light The Fuse Productions.  More importantly, he is a proud family man and has been married for 10 years to Gina Sims.  They have 2 children; Robert Jr., 10 years old and Autumn, 4 years old.

For sixteen years, he taught mathematics on two levels: Middle and High School; in several school districts: Durham Public Schools-Durham, NC; Richmond City Public Schools-Richmond, VA and Cumberland County Schools-Fayetteville, NC.  In addition to teaching, he has coached several sports such as Football, Wrestling, Basketball and Track and Field.  During his tenure as an educator, he has served roles as the Athletic Director and as an Assistant Athletic Director.

Furthermore, in his quest of formal education, Robert received his Bachelor of Science degree in Business Administration from Fayetteville State University-Fayetteville, NC.  He received his teaching certification from North Carolina Central University-Durham, NC.   And recently, he received his Masters of Education in Executive Leadership Studies from Gardner-Webb University-Boiling Springs, NC.

In his spare moments, Robert is an avid practitioner of martial arts. He has trained in many different disciplines and holds several black belts.

Above all, Robert believes that a quality education should be for and accessible to all!