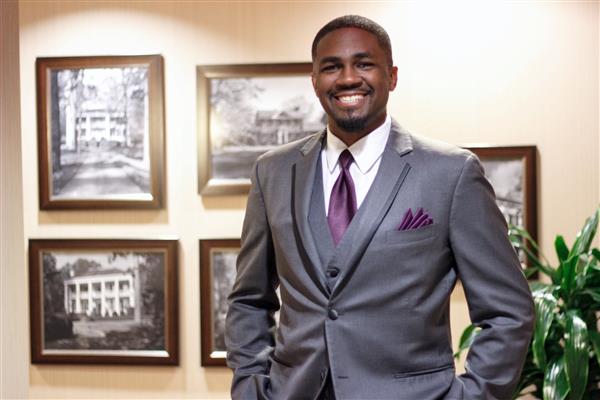 Born and raised in Atlanta, GA, Mr. Desmond T. Tarplin began playing drums at the age of 3 and hasn't looked back since. Mr. Tarplin grew up always interested in sports and music, participating in many activities while also excelling as a student. In 2005, he graduated from Stockbridge High School as a 3-year veteran of the Tiger Marching Band and a multi-sport athlete.

Following high school, Mr. Tarplin attended the University of West Georgia (Go Wolves!) in Carrollton, GA and majored in music performance with a concentration in jazz studies. During his time at UWG, he was an active member in many ensembles including the UWG Wind Ensemble, Jazz Ensemble, the UWG Jazz Percussion Group, jazz combo, concert band, percussion ensemble, and "The Sound that Lights the South," the UWG marching band. He served as a section leader  or principal player for at least two years in every ensemble. Mr. Tarplin was initiated in the Spring of 2007 as a member of Kappa Kappa Psi, National Honorary Band Fraternity, Inc. and worked in a service capacity to the music department and UWG Bands. In May of 2011, he graduated from UWG with a bachelor's degree in music performance.

Mr. Tarplin continued his education by pursuing a master's degree in music performance from Valdosta State University (Go Blazers!) while also serving as an athletic bands graduate assistant. He assisted with the direction and instruction of the VSU Blazin' Brigade Marching Band and co-directed the Blazin' Brigade Pep Band during basketball season. During his time at VSU, he also participated in the VSU Wind Ensemble, steel drum band, percussion ensemble, jazz ensemble, and jazz combo. Mr. Tarplin continued to serve with his fraternity including holding the elected office of Southeast District Member-at-Large. He completed his degree at VSU in the spring of 2013.

Mr. Tarplin's elementary teaching philosophy has two basic tenets: first, to provide students with the technical knowledge to understad basic musical concepts; and second, to teach students to make personal and emotional attachments to music and music-making process. This encourages the students to think critically about what they are performing and which leads to success in other areas of academia. He believes that the classroom relationship should revolve around trust and respect; with those two factors in place, the students will be in a better position to succeed.